I’ve been a sub-par blogger as of late due to forgetting to take pictures of my days. Please don’t hate me 😉

At school I’ve been focusing more on actually attempting to do things a scientific way. Usually, I just order parts and assemble them and hope for the best. This isn’t exactly a scientific method and I have a hard time justifying why I choose specific parts. My bad. I just tend to follow my gut and ignore any maths that may be necessary.

BUT I am trying to change my ways and be a good little grad student for a change (it’s ok if this sounds hilarious because it totally is). I spent all day yesterday working on a mathematical model for a heat sink design. Rather than just draw something out and say it looks good, I want my design to have a purpose behind it!

So I dusted off my Mathcad skillz and started math-ing. 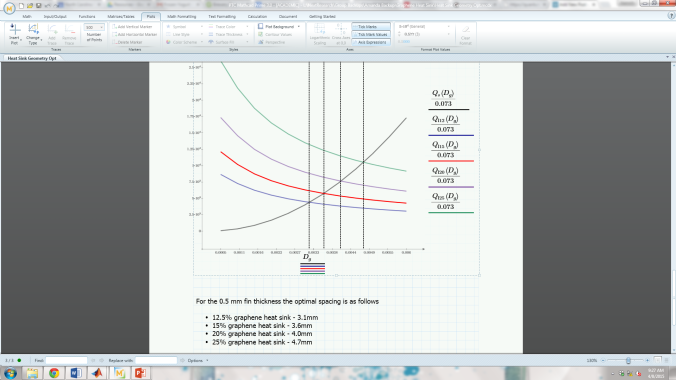 Anyways, not many people know about this software, so imma nerd out for a min and tell you about it. Most engineers/scientists use MATLAB. It looks a little something like this… 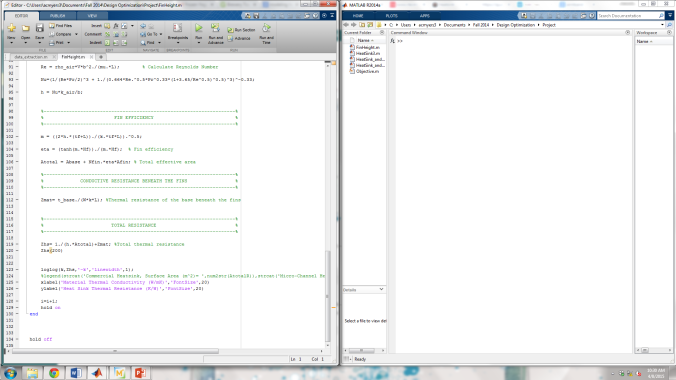 It’s a code-based tool that does just about anything you want it to. It’s super useful and awesome and everyone loves it. On the other hand, I don’t hate it. It’s not my favorite tool simply because my mind doesn’t work in a step-by-step computer fashion. So coding and I don’t usually get along too well. Luckily there is other software out there (Mathcad!) for people like me who are more visual/scattered thinkers.

Mathcad is more designed for engineering than it is for science and such, but it allows me to write out equations as I would on paper. It also keeps track of units, is a built in word processor, and you can put images in your files. While there is a certain ‘language’ that the software uses, it’s very intuitive and easy to keep track of. Here’s an old version of Mathcad that shows what I’m talking about.

This makes WAY more sense to me than this…….

Both are doing the same thing (the pictures aren’t but please ignore that I’m trying to make a point here) but one is a code-interface and the other is a graphical interface. My brain prefers the pretty pictures 🙂

Are you a visual thinker? How does it affect the way you work?

PS if you are interested in learning more about Mathcad, let me know! I may be able to write up some basic tutorials in later posts.