Good morning! I don’t know about you guys, but I did NOT want to get out of bed this morning. So I took full advantage of grad student life and slept in a bit.

Yesterday ended up being really busy and productive! I stayed at work pretty late since I wanted to head straight from the office to the pool for a swimming lesson. If you’re anything like me, it’s been since the YMCA swimming lessons when I was ….like 5? since I had a lesson. With training season approaching, there’s no better time than to get your form looked over by a pro.

Note: the pool was definitely not this empty. I don’t think I’ve ever actually seen it this empty….

Anyways. Good news is that my form is actually not at the super beginner level I thought it was! Bad news is, I can’t blame my slowness on bad form anymore (sad trombone). Slowness is entirely due to laziness. Sooooo looks like there will be quite a few pool dates in the near future with some speed work.

We worked on a couple drills (Catch up, fingertip drag, pulls, kicks, etc) and I think the total yardage ended up around 600-800? Idk. Totally wasn’t counting.

Steve stopped by and picked me up and we went straight to a Hurricanes game. The Hurricanes are North Carolina’s pro hockey team, fyi. We were waaaaaay up in the nosebleeds this time, but it’s surprisingly easier to follow the game when you can see the puck. 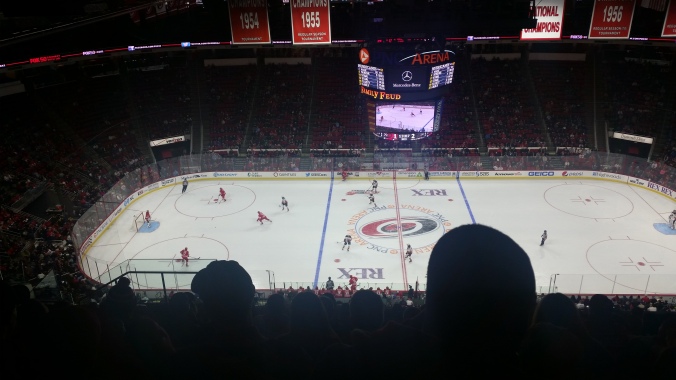 I still have no idea what official hockey rules and regulations are but it sure is fun to watch! Especially when you go with a great group of friends 🙂 Sadly the ‘Canes lost 2-1, but it was still a great time.

Gotta love the photobomb in the back!