So here I am, shamelessly exploiting our dog for blog content. I figured you could use some background though. I got Indy when she was about 11 weeks old. 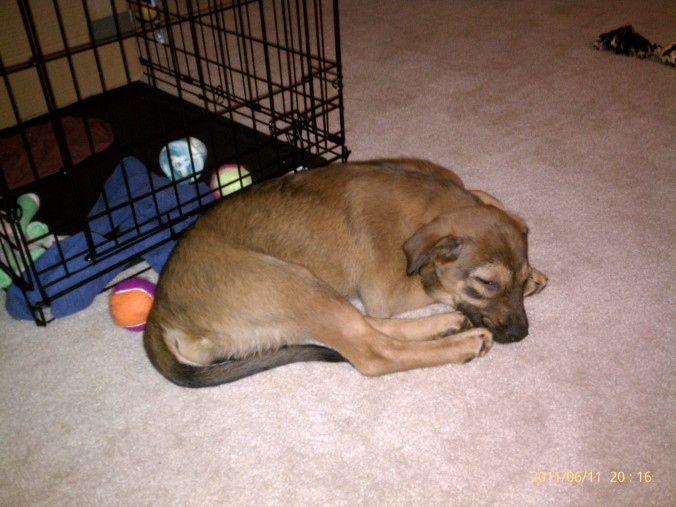 Here she is napping with her first toy, the octopus.

She was already traumatized although I didn’t realize the extent of it until I got her home. She was scared of life and everything in it. When she was a puppy lots of things would quite literally scare the shit out of her including but not limited too small children (can’t blame her there), skateboards, any and all people, most things that made noise, doorways, stray leaves, suspicious looking toys and even me if I had been away for more than a few minutes. She seemed to think I might have changed and was suddenly out to get her. Her oldest friend Xiao Bao helps her learn how to be a real dog.

Here’s a good shot where she looks totally normal. No hint of the neurotic dog that darts through doorways, hides under the big table or accidentally craps themselves. She was very comfortable in my parents backyard in this pic although she did pee in the car on the way up there.

I spent a lot of time researching how to raise a dog and train them to be good. Indy’s disposition helped a lot too. She was too scared to misbehave. I took a beginner training class at pet smart which helped us get the basics down.

Eventually she got the whole potty training thing and I moved to a new apartment because I like carpets that haven’t been peed on… whatever, I’m picky like that.

Since then we’ve had a lot of great adventures. I’m always working on pushing her out of her comfort zone

Then we met Amanda and she had ideas for even more great adventures. We took her swimming and mountain climbing

and she bonded with Amanda in no time flat. I was suddenly second best when it came to getting pets, I’m pretty sure it’s mainly the fingernails though 😉 In fact, she was out there cheering Amanda on in her most recent marathon

When we moved in together Indy faced a new challenge. Molly, the guardian of the wench house, is a sassy and very dominant corgi. Indy’s baseline of mild panic increased to constant fear as she adjusted to living with new people and a bossy dog who felt like her territory had been invaded. After a while the friction between the two decreased and they are a little more tolerant of each other.

She still get’s to have play dates with the dogs she like though. She loves her friends and knows them all by name. If we ask her if she wants to go see Xiao Bao or Copper then she starts jumping and whining until we go.

We’ve also recently relaxed rules about being on the bed. It took some time for Indy to be ok with being up on a people bed but now she loves it. 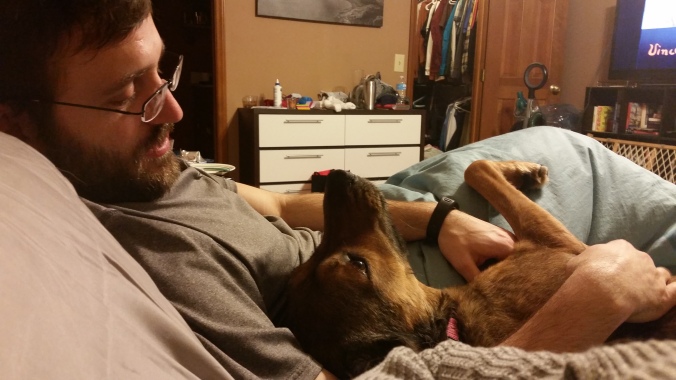